Soundtrack to My Life: All of Me by Billie Holiday (Bank), 2017. Magazine clippings and polyvinyl adhesive on kozo paper. 48 x 38 1/2 inches.

Soundtrack to My life: Blowin' in the Wind by Bob Dylan, 2018. Magazine clippings and polyvinyl adhesive on kozo paper. 47 x 38 1/2 inches.

Soundtrack to My Life: Just Like Heaven by the Cure (Liquor Store), 2018. Magazine clippings and polyvinyl adhesive on kozo paper. 66 x 38 1/2 inches.

Yancey Richardson is pleased to present Rachel Perry's Soundtrack to My Life, the artist's sixth solo exhibition with the gallery. Throughout her career, Perry has used familiar materials such as register receipts, produce stickers, shopping bags and voicemail messages to comment on what she calls “the business of living.” Comprised of a series of large-scale collages based on the lyrics of popular songs, Soundtrack To My Life continues Perry's interest in observing, collecting and utilizing the pedestrian materials and experiences of daily life to comment on the permeation of daily existence by consumer culture.

Since the 1930s, music has been curated and sold to business owners to help speed up factory workers, motivate shoppers and relax elevator riders. Noting the omnipresence of music as she moved through the mundane routine of her day, Perry gathered the lyrics of popular songs she overheard played as background music. The “soundtracks” in the exhibition include hits by major artists from various eras and genres such as Elton John, The Cure, Bruce Springsteen, Billie Holiday and Frank Sinatra, which were played at the grocery store, the barbershop, the bank, the liquor store and the dentist.  Perry fabricated the collages by cutting individual letters from ads in junk mail and print magazines delivered to her home including Sports Illustrated, Artforum, The New Yorker, and The Economist, among others. The new configuration of decontextualized type of varying sizes, shapes, colors and fonts transforms the lyrics into a kind of oversized ransom note suggesting the takeover of consumers by marketing forces using aural means.  As Perry notes, “Sound, in this way, exerts control. Pop music becomes political."

In the project gallery, Perry presents new examples of her ongoing project Lost in My Life, a series of photographs of the artist subsumed in the discarded minutia of consumer culture. Part performance, part installation, Perry immerses herself in environments built from familiar, leftover consumer materials: price tags, produce stickers, markers and gift boxes. Perry appears in every image, though she never reveals her face, emphasizing the dichotomy between personal identity and the anonymity of daily existence. In the artist’s words, “These leftovers form the language of modern life.”

Born in Japan in 1962, Rachel Perry lives and works in Boston and New York. Her solo museum exhibition, 24/7, opened at the DeCordova Museum and Sculpture Park in 2011 and traveled to the Zimmerli Museum, New Brunswick, NJ, through July 2012. In 2016 she received a large-scale outdoor commission by the Isabella Stewart Gardner Museum.  Perry’s work has also been exhibited at The Institute of Contemporary Art, Boston, The Drawing Center, New York, the DeCordova Museum and Sculpture Park, the Krannert Art Museum, the Museum of Fine Arts, Boston and Kunstmuseum Bonn. 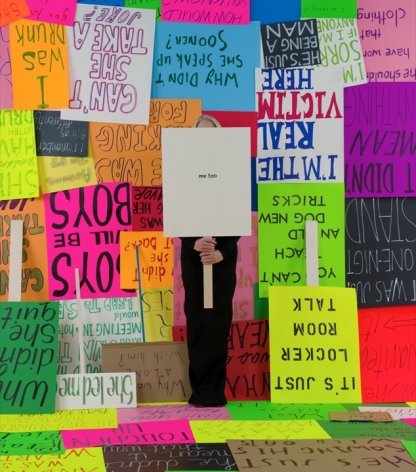 The New York Times Magazine The Reckoning: Women and Power in the Workplace
View More
Back To Top