For the 2020 edition of The Art Show, Yancey Richardson will debut a series of new self-portraits by South African artist and visual activist Zanele Muholi, including a large-scale, site-specific photographic mural. Made in 2019 in the formerly colonized countries of Namibia, Botswana, Mauritius and South Africa, these works continue Muholi’s celebrated series Somnyama Ngonyama (translated from Zulu as “Hail, the Dark Lioness”). While bearing witness to the history of European imperialism in Africa, Muholi marks their presence in these locations, reclaiming the space as African.

Since 2015, Muholi has used self-representation in locations throughout the world as a means of addressing issues of race, gender, discrimination, personal history and African political history.  Their images are intended to offer resistance to stereotyping and discrimination, and enforce the idea that the personal is political.

Muholi’s photographs and large-scale murals were included in May You Live in Interesting Times, the main exhibition of the 58th Venice Biennale. A mid-career retrospective of their work opens at the Tate Modern in April 2020. The gallery has represented Zanele Muholi since 2013.

Born in Durban in 1972, Muholi lives in Johannesburg. In 2002, they co-founded the Forum for the Empowerment of Women as well as founding Inkanyiso, a non-profit organization dedicated to visual art, media advocacy and visual literacy for South Africa’s LGBTI community. Muholi’s work has been exhibited in museums worldwide including at the Brooklyn Museum, Kulturhistorek Museum (Oslo), Seattle Art Museum and Stedelijk Museum (Amsterdam). In addition, their work has been featured at Documenta 13, the South Africa Pavilion of the 55th Venice Biennale,  the 29th São Paulo Biennale and will be included in the 2020 Sydney Biennale. 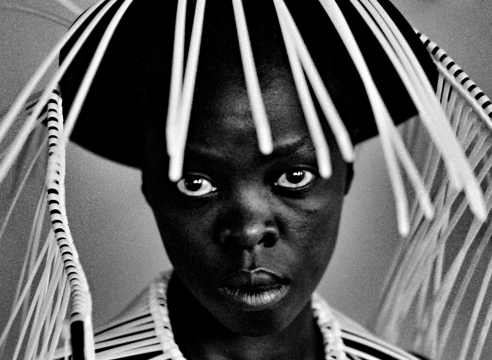 Zanele Muholi
Back To Top