Armenian-Canadian photographer Yousuf Karsh (1908 – 2002) is known for his iconic portraits of some of the leading figures of the 20th century, from Albert Einstein and Winston Churchill to Jackie Kennedy and Andy Warhol.

During a career that spanned six decades, Karsh developed a distinctive portrait style that included the use of artificial lighting in order to achieve dramatic effects. He was meticulous in his approach; prior to a session, Karsh would conduct extensive research relating to the sitter, studying existing photographs and often meeting with them in advance. This, combined with his particular use of lighting and careful posing, enabled Karsh to simultaneously convey the private personality and the public persona of his sitters. His 1941 portrait of Winston Churchill, published on the cover of Life magazine in 1942, launched Karsh’s international career. He went on to travel the world photographing many of the world’s most prominent personalities.

Yousuf Karsh was born in 1908 in Armenia and, after fleeing with his family to Syria in 1922 to escape persecution, he immigrated to Canada in 1925. He was introduced to photography by his uncle, who facilitated his apprenticeship with the renowned Boston portrait photographer John H. Garo in 1928. This led to Karsh setting up his own portrait studio in Ottawa in 1932. He moved to Boston, Massachusetts, in 1992, where he died in 2002. 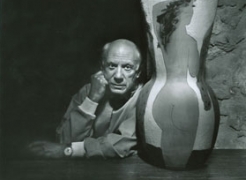